14 years in the real world is instantly obliterated at the start of Incredibles 2, which picks up the story of the superpowered Parr family at the exact moment that their previous cinematic adventure ended. Time may have stood still for the titular heroes until now, but a lot has happened in the last decade-and-a-half for audiences weaned on Pixar pictures.

The celebrated animation studio wasn’t even owned yet by Disney when “The Incredibles” came out in 2004 and the only sequel they had released by then was their 1999 “Toy Story” follow-up. Now, Pixar has been under Disney rule for over a decade and their filmography is littered with sequels, including two for the lucrative “Cars” franchise. With the exception of “Toy Story 2” and “Toy Story 3,” Pixar’s sequels tend to come up short in their attempts to rekindle the magic of beginning chapters.

This real-life context is important to consider in terms of the company’s latest sequel, because Incredibles 2 is defined by this narrowing of Pixar’s commercial focus. It’s still imbued with the studio’s iconic energy, still fun and funny and visually refreshing, but there’s an overpowering aroma of cash-grab greed that stinks up too much of the experience.

Writer/director Brad Bird is so eager to kick off the action immediately that his script ends up constantly lagging behind in its efforts to justify why this new story needs to be told. The first movie was so slickly effective in establishing a world of outlawed superheroes brought out of forced retirement by a jealous rival, coolly examining what makes certain individuals special (special powers, evidently). The message was a bit mixed, but the movie gave its villain some thematically meaty motivation.

For the sequel, Bird is stuck in static territory, with superheroism still illegal and a new villain popping up just in time to give the heroes something to do. The new villain, a masked hypnotist called Screenslaver (voiced by Bill Wise), harbors an anti-media philosophy that is spelled out clearly in a monologue that rails against society’s prioritization of screen time over lived experiences. It’s an appropriately modern sentiment in the somewhat retro universe Bird has concocted, but it’s a theme that the movie refuses to further explore and one that is more a red herring for the villain than an actual cornerstone of their purposeful antagonism.

With a predictable twist looming predictably, the movie’s most impactful power is merely its dazzling speed. The plot is pretty dull when broken down, but Bird is a master of cinematic set pieces and Pixar animators have long inherited the marvelous musicality and fantastic flow of movement that the artists behind their parent company’s classic features previously perfected. Watching Elastigirl (voiced by Holly Hunter, “The Big Sick”) race through traffic on a custom motorcycle to catch up with and then stop a runaway train is easily exhilarating enough to acknowledge that the movie operates best as a purely entertaining thrill ride.

The emotional content is certainly lacking, especially in the individual arcs of the family members, such as a time-consuming subplot where gawky teen Violet (voiced by Sarah Vowell, “A.C.O.D.”) pines for a boy at school whose erased memory causes him to forget their first date. Surely, a young female superhero in 2018 deserves a better plotline than one that involves crying over adolescent romance.

In fact, much of Incredibles 2 feels stuck in the past. The onscreen world is a mix of gee-golly nostalgia and lavish technology, a combination that Bird is particularly enamored with, as evidenced by past pictures “The Iron Giant” and “Tomorrowland,” but it’s the clichéd family dynamic that feels unnecessarily old-fashioned. The story’s attempt to generate friction between the Parr parents by sending Elastigirl on a covert work trip and leaving Mr. Incredible (voiced by Craig T. Nelson, “Gold”) at home with the kids fizzles far more often than it sparks.

The exhausted father of three struggles as he juggles Violet’s sense of loss and rejection, son Dash’s (voiced by Huck Milner) demanding math homework, and baby Jack-Jack’s (voiced by Eli Fucile) sudden explosion of kaleidoscopic superpowers. The latter provides the movie’s funniest moments, especially during a “Looney Tunes”-esque showdown with a trash-hungry raccoon. But for the most part, the characters have either uninspired arcs or just no arc at all.

Eventually though, the kids get their chance to bask in the superhero spotlight and it’s an overdue moment that nicely encapsulates the movie’s simple theme of family members supporting and protecting each other. More could be gleaned here, but Bird remains preoccupied with all the action, which at the very least is extremely smooth and pretty.

Pixar’s slickness is always to be admired and superhero action certainly provides some attractive avenues for the animators to display their eye-popping prowess. While the overall experience feels too light, too pointless, too recycled, there’s still a sense of excitement to be felt in the moment and that feeling is aided by Michael Giacchino’s terrific score. Giacchino has already composed some of Pixar’s very best soundtracks and he’s in top form again here, crafting a moody aural identity for the movie and continuing with the 007 influence he established in “The Incredibles.”

Quality voice work and the usual Pixar charm add enough positive ingredients to make Incredibles 2 a fine addition to the studio’s carefully curated filmography. It feels unnecessary to be overly negative about a family flick that’s this much fun, but the sense of a missed opportunity fumbled by a company resting on its laurels too keenly persists.

Things have changed for Pixar and these occasional commercial detours prove too weak on delivery. Much of their original works continue to impress, so imagination isn’t exactly in short supply over there, but a 14-year wait for a shiny, hollowed-out sequel only further exposes the already thinly veiled corporate string-pulling. Of course, they’ve got to make the big bucks somewhere. Might as well do it by throwing a few soft punches. 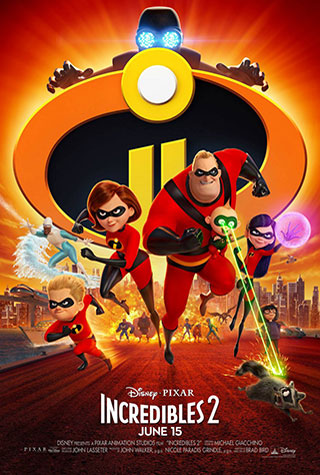