Adam is a man (although not the first) living with his wife in the congested holy city of Nazareth. He is a member of the Christian Arab community, which is a population in decline in these parts. As the Angel Gabriel descended on Nazareth to announce the coming of the Messiah, Holy Air opens with a less grandiose birth announcement when Adam’s wife, Lamia, resourcefully pees on a pregnancy test amidst a traffic jam. This unexpected and overwhelming news propels the story forward despite their current gridlocked state.

Stuck in traffic and a financially and spiritually unsatisfying job, Adam (Shady Srour, “Don Juan of Galilee”) does not feel ready for this responsibility. In the next scene, the steady camera focuses on him in the bathtub while his wife (mostly out of frame) playfully lists the extensive expenses of a child. Once she concludes, Adam submerges himself in the tub, perhaps illustrating his inclination to throw the baby out with the bathwater. Meanwhile, his dying father has left him with his birthright (the keys to his father’s workshop) and another of his “crazy ideas.”

On a precipice of his own, stuck between losing a father and becoming one, Adam decides his next entrepreneurial endeavor entails the bottling and selling of “holy air” from Mount Precipice, the cliff from which an angry mob attempted to throw Jesus after his bold proclamation in the synagogue. Adam’s main clientele are devout tourists to the holy land, at once both gullible foreigners and faithful observers longing to believe in something greater than themselves.

Sale after sale, trip after trip, Adam ascends the Mount to fill more bottles with this holy air. But why does he bother making the trek when ultimately selling a nice but fabricated story? For him, this is a sacred pilgrimage, as well. Life, like religion, is cyclical, complete with rituals and routines. Closing his eyes and breathing in the air, he needs to believe that he can provide for his growing family. In these intimate moments, Adam is not nearly as cynical as his enterprise suggests.

Lamia (Laëtitia Eïdo, “Dancing Arabs”) is presented as an outspoken feminist, a proponent of female empowerment and opponent of Valentine’s Day, claiming that the originally Christian holiday has commoditized affection into a product. And while Adam’s new endeavor is similarly exploitative in taking advantage of people’s religious faith and fanaticism, one could argue that religion itself is inherently exploitative. Ancient and modern religions have been capitalizing on the fear and doubt of mere mortals since the beginning of time.

While being carried in Adam’s arms (maybe referential to Jesus being carried from the cross), his father wisely claims there are three types of questions in this world: Those easily answered; those answered over time; and those for which answers are never revealed. Adam knows he wants to start a family with Lamia. In time, they will know the baby’s gender. But all the rest of it requires a leap of faith, prophetic platitudinous toilet paper, and an open mind.

Holy Air is bookended with important women in Adam’s life relieving themselves (a basic bodily function as essential as breathing) mid-traffic jam. The camera is consistently still, framing the required shot, and avoiding quick cuts between actions and conversations. It slowly pans out, demonstrating the smallness of humanity and creating the effect of God (or some higher power) ambivalently looking down on His “grandest” product. 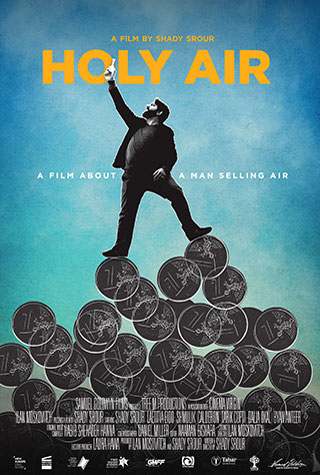