Midway through The Vanishing of Sidney Hall, in the midst of a breakdown (breakthrough?), surrounded by his typewriter and empty bottles and strewn about pages, signifiers of talent devolving into madness, the successful yet troubled novelist at its center self-consciously admits to having recently written only “first lines and first pages. No middle. No end.”

By contrast, co-writer/director Shawn Christensen (“Before I Disappear”) has established a triptych of narratives with beginnings, middles, and unsatisfying endings that are decoupled and rearranged like train cars, at once both creating a puzzle and providing too many of the missing pieces. Sidney Hall (Logan Lerman, “Fury”), the high schooler, is a talented and misunderstood loner. He is walled off from his parents and peers, except for Melody (Elle Fanning, “The Beguiled”), the manic pixie dream girl next door, and Brett (Blake Jenner, “The Edge of Seventeen”), a former friend and popular athlete now in need of his help. There is also that one teacher who needlessly disciplines Sidney and another who believes in his potential enough to support his novel idea: “What if I wrote a novel?”

In some future timeline, at the age of approximately twenty-four, mid-Sid (as I like to call him) has successfully published said novel. The requisite press tour is hindered by undiagnosed marital troubles and untreated health/mental health issues. Sidney’s book is short-listed for the Pulitzer, though later removed from contention and banned in some states for inciting violent incidents. Presumably overcome with guilt, further into the future Sidney has fully embraced his reclusive tendencies and “vanished” from the public eye. Bearded and on-the-run (and a dead ringer for a scruffy Aaron Taylor-Johnson), with the Searcher (Kyle Chandler, “Game Night”) hot on his heels, an incognito Sidney is traveling cross-country seemingly setting fire to his published works. The converging timelines never quite overlap or intersect as if the pages containing those intervening years have been forcibly ripped from their bindings leaving gummy gaps between the disjointed chapters of the narrative.

The audience deduces (and later Melody says as much) that Sidney has mined his life for narrative inspiration. Originally written as a means for exorcising his demons, the novel now brings out the demons in the imitators it has inspired. “Suburban Tragedy” is the type of novel — like “Catcher in the Rye” for some — that inspires a certain type of disturbed reader to misinterpret or misread its message and realistically act out its violent plot points in service of some such cause. The Vanishing of Sidney Hall carries those themes of misunderstanding and misinterpretation throughout, perhaps too effectively since I didn’t seem to get it. Sidney feels obvious guilt over the violence his work has inspired, but that is not the whole story. The film eludes to undisclosed and undiagnosed trauma that continues to haunt Sidney and has begun to manifest physically and psychologically.

The majority of the propulsive action occurs in the first chronological timeline. Timelines two and three deal with the emotional fallout and healing of that initial trauma. Sidney has a fraught relationship with his mom, Velouria (Michelle Monaghan, “Pixels”). She is the inspiration for his introductory short story, which is disturbing given the subject matter. In turn, she secretly goes through his things and reads his journals and assigns a certain narrative misunderstanding to his life and art. Having become a mother at a young age, presumably pregnant and married to her high school sweetheart shortly after graduation, she lives in a state of arrested development having never had her own opportunity to grow up.

Sidney’s development is similarly arrested. The film assigns Lerman and Fanning — both of whom are talented actors — the Herculean task of embodying the same characters from the ages of sixteen/seventeen to thirty. They pull off the high school age roles, but later iterations of their characters seem performative and false. Eyeglasses and sharp new haircuts do little to convince the audience they are more than a couple kids unconvincingly playing house. But, then again, this is a film almost entirely concerned with impersonation, self-authorship, and faking it until making it.

The Vanishing of Sidney Hall has given itself another truly impossible task: That of communicating great writerly talent onscreen without the words of a great writerly talent. Within the text of the film, Sidney’s acolytes — and there are many willing to speak on just how talented he is — remark on the emotional honesty and compelling mapping in his work. His teacher and mentor observes that “Sidney is brilliant, one of our brightest students.” Not only are these accolades not evidenced in Sidney’s work, they also fail to coalesce in the film, which is structurally, temporally and geographically all over the place, lacking a cogent map, and emotionally untrue at times and manipulative during others.

Logan Lerman’s Sidney Hall is present in each timeline and nearly every frame. He does not vanish so much as those in proximity to him do. Each chapter — tracking him during the ages of seventeen, twenty-four and thirty, respectively — highlights his historical inability to maintain close relationships. People are drawn to him and his talent, but he cannot allow himself to get close to anyone anymore. Not after what happened in the first chapter of his story and has inspired everything since. Sidney’s discomfort with the work and his success has less to do with the way his book has inspired others to commit crimes and more to do with the real life suburban tragedy he mined for inspiration. In reality, he played a crucial role in the story (as shown in the film’s first timelines), but the implication is that Sidney the author excised his involvement from the story as told. He removed himself from the narrative, and that is the true vanishing of Sidney Hall. 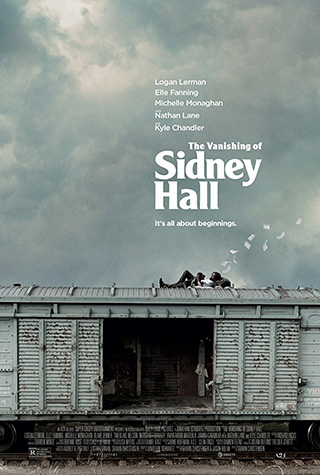