Eat Locals begins with a group of vampires convening in an English country farmhouse. Like Mafioso, they’re here to discuss their turf. Saucy Vanessa (Eve Myles, “Keeping Faith” TV series) has seduced a young Romany bloke named Sebastian (Billy Cook, “Trespass Against Us”) and introduced him as a potential replacement for a rogue vampire who’s been deemed surplus to requirements. However, as the group is discussing whether to recruit or murder naive Sebastian, the Army shows up.

Despite being thousands of years old and having lived through countless great wars, the vampires are trapped in a cottage by a handful of disordered squaddies who can’t shoot straight. Moreover, the military is having a civil war of its own: How should the vamps be dealt with? Padre Larousse (Mackenzie Crook, “Pirates of the Caribbean: Dead Man’s Chest”) is adamant they should be slaughtered wholesale, while Colonel Bingham (Robert Portal, “Mr. Turner”) is intent on capturing one of the devils for science.

The questions keep coming: Who will emerge triumphant, the Ancient Evil or the New Order? Will cheeky Sebastian make it out alive? How did such a competent cast get sucked into this amateurish dross?

Off the bat (excuse the pun), the movie, Eat Locals, looks horrible. In spite of reasonable production values, the blocking and framing is ugly and flat, and it’s lit like a TV show. With its ye olde rural setting it resembles an episode of “The League of Gentlemen” at times — albeit with none of the weirdness or the atmosphere. Narratively speaking, there are elements of “What We Do in the Shadows” in the banter between the vampires; but the mockumentary conceit is sorely missing, and in terms of memorable characters, humor or tonal balance, there’s no comparison.

The title is a Brexit-infused reference to eating local produce, but does it actually make sense? Vampires don’t eat people. Well, maybe these ones do. Even after enduring every one of the film’s 90 minutes, I’m still not sure. Now zombies, they eat people. And that would have made more sense: A kind inverse “Night of the Living Dead,” with the walkers besieged by the living. Unintelligible grunting would also have been preferable to the dialogue that comprises the final screenplay.

“This is madness!” one soldier protests. “This is war,” the colonel retorts. The script ranges from the clichéd to the nonsensical. What are presumably meant to be moments of tension between characters are simply stilted and awkward. And the characterization itself is inconsistent. Sebastian is panic-stricken for first act, running for his life; but then he finds body parts in a fridge and suddenly he’s the coolest guy in the room. Colonel Bingham is presented as a wise and conscientious leader, yet his men are in constant disarray — a fact by which he seems largely unconcerned.

Often, when an actor turns director — this is the directorial debut of one Jason Flemyng — the performances are the strong suit. Not here. The usually personable Charlie Cox (“The Theory of Everything”) is a bore, playing an ex-military vampire who seems more like an ex-accountant. Freema Agyeman — so electric in the Wachowski’s “Sense8” TV series — does nothing but look pretty. Cook is your regulation cockney chancer, and a charmless spectacle it is. Tony Curran (“Race”) is on set to do nothing but sneer. Poor Annette Crosbie (“Into the Woods”) looks almost ashamed to be involved. And then there’s the woefully miscast Crook, who delivers the worst performance of his career.

None of them can suck any bloody humor from the script. An old woman swearing whilst firing an assault rifle isn’t funny. Two laughing soldiers taking turns to shoot at the feet of a terrified female civilian is even less funny. And showing us end-credits clips of the cast having more fun on set than we had watching the movie is the worst joke of all. Tellingly, the one legitimately great idea — a devilishly smart advertising parody — arrives in the final moments and doesn’t even involve any of the main cast.

The core problem with Eat Locals is that, in striving to mix a cocktail of genre conventions, it excels at none and dilutes them all. As I’ve mentioned, none of the character drama rings true. As an action movie it is inert: Static shots of people firing out of the frame, cutting to digital ricochets. The one vaguely kinetic moment is a second unit fistfight in a barn (because the Asian vampire [Lukaz Leong] knows kung-fu, naturally). The final sequence — by which time the film is overflowing with nameless characters — is confusing and poorly edited. Then there is the horror movie aspect, which amounts to zero tension, and gore limited to blood dripping from bared toyshop fangs. The kills seem always to be where the camera isn’t.

A listless, machine-made musical score compounds the sense of a film without a clear vision of what it’s striving to be. Sometimes genre mashups can be fun or enlightening or strangely original; but sometimes they can be an incoherent mess where the comedy falls flat, the drama rings hollow, and the horror is tame. Avoid Eat Locals like a vampire dodging daylight. 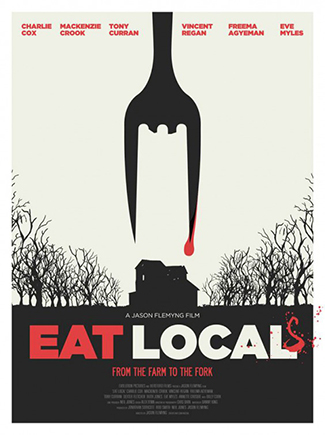